Visualizing the precipitous rise in gun sales during COVID-19

So far in 2020, firearm background checks are happening significantly more frequently than they did during the first six months of the last 20 years. Some media reports captured the gun-buying frenzy during its apparent peak in March, but according to data from the FBI NICS, the month of June saw the largest single month count of firearm background checks in the last 20 years.

The data, which is scraped and cleaned by BuzzFeed News, shows a massive spike in firearm background checks in the last 5 months:

The original, interactive table can be found here

As the table shows, the last 5 months have seen some of the greatest numbers of firearm background checks since the FBI has collected such data. It seems as if the only non-2020 entrants to the top 7 are from December 2015, and December 2019, which are (perhaps coincidentally) both the final months before new presidents took office.

Visually, we see that firearm background checks follow some seasonal trends, but by and large, have undergone unprecedented spikes in the last 5 months: 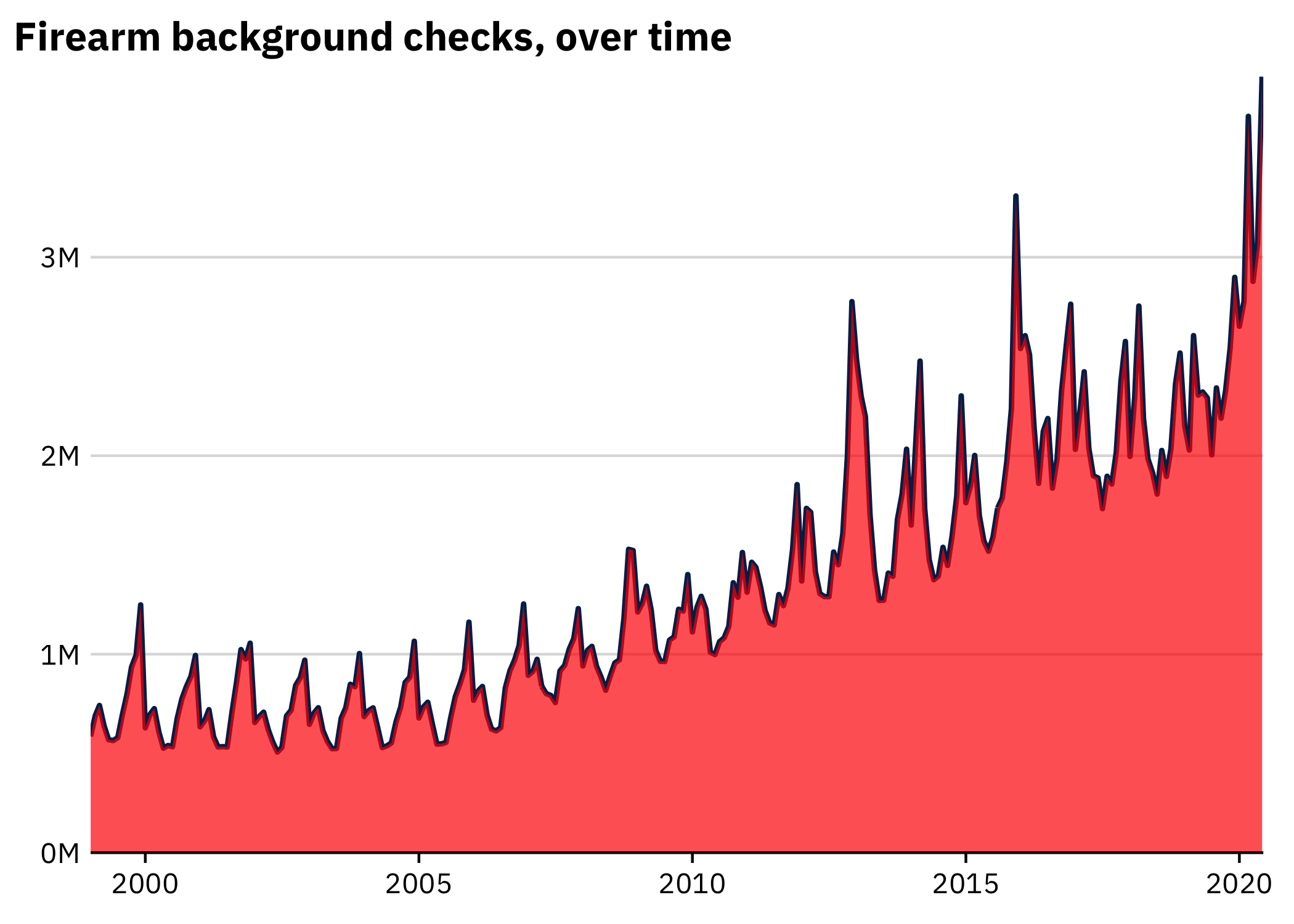 And we can better understand the magnitude of these shifts by visualizing year-to-year changes: 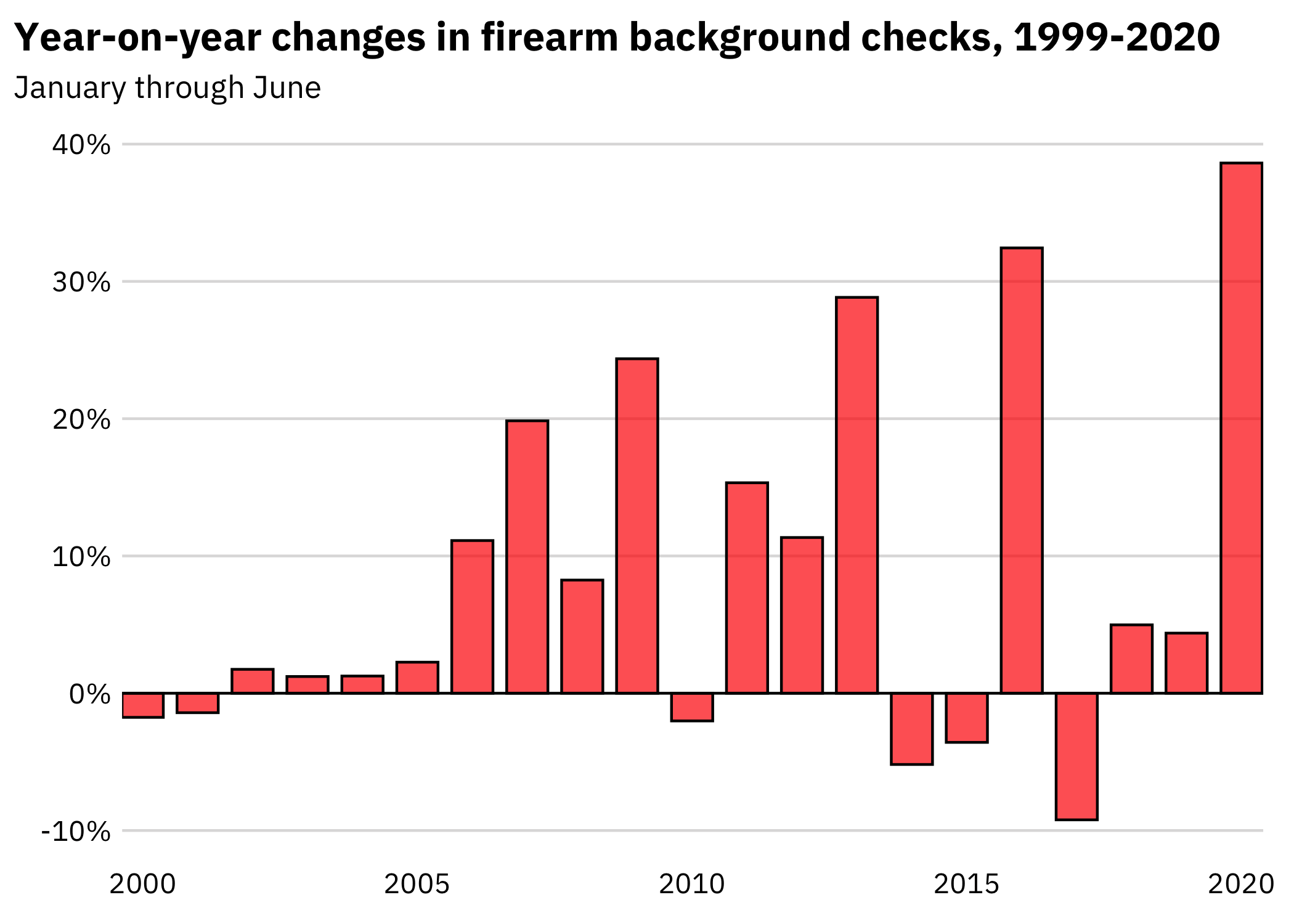 Visualized another way, we can explore the temporal change within each year for every year between 1999 and 2020, with 2020 highlighted in red. 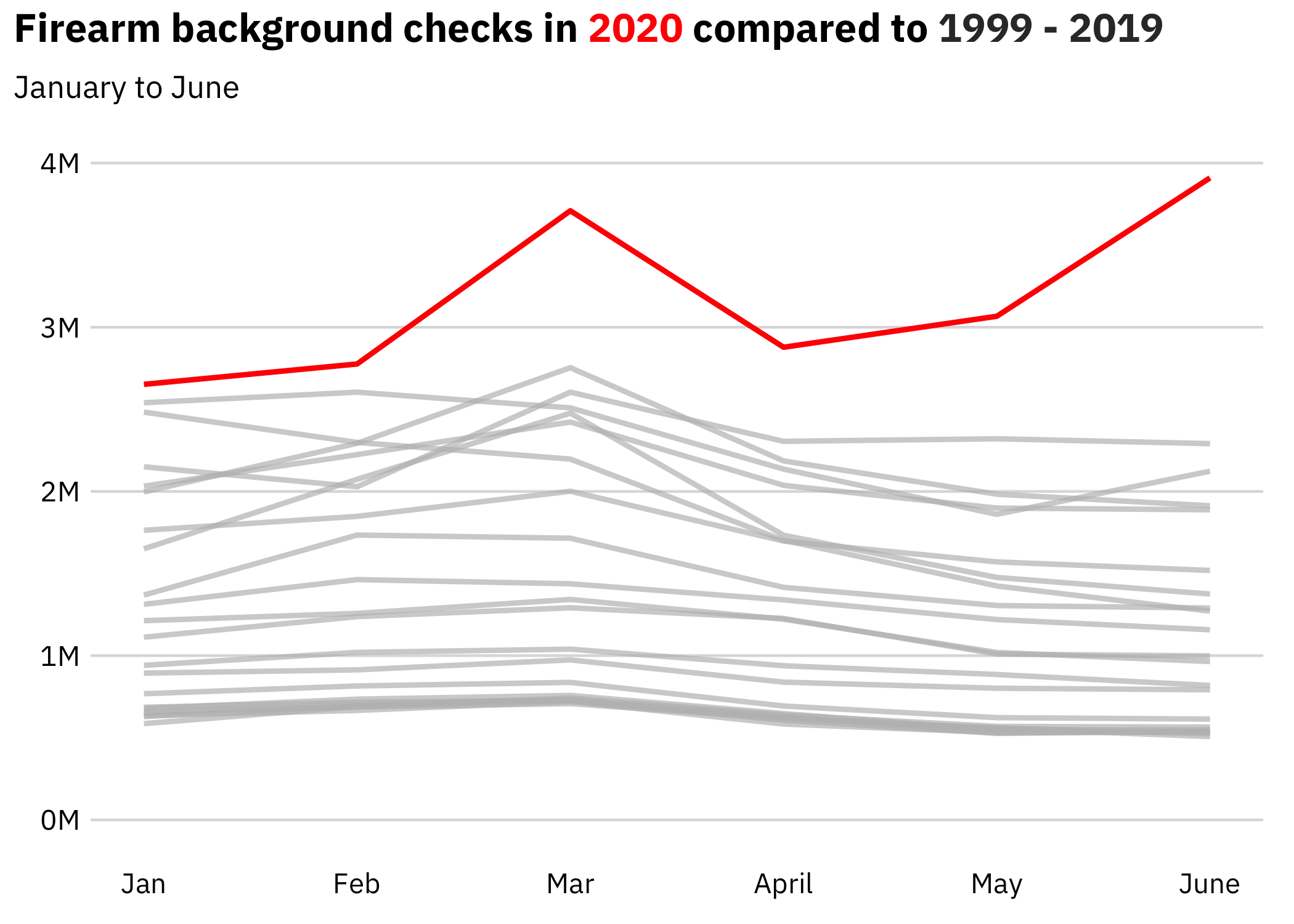 The FBI database also includes background check data for each U.S. state. This data allows us to compare trends across states and over time (using geofacet):

Most obviously, background checks are a proxy for gun purchases and gun ownership; as such, this data informs us that more and more people are grabbing for guns during COVID-19, perhaps in anticipation of some post-COVID apocalypse or perceived government overreach during.

In addition, one risk is that more guns can lead to greater numbers of firearm suicides. One group of researchers at the gun safety organization Everytown predicted that COVID-related unemployment would lead to a 20-30% increase in firearm suicides (5000 to 7000 people). As such, a rise in firearm-related background checks may signal an impending surge of gun violence in the forms of both homicide and suicide.

Firearm background check data, however, requires close scrutiny. The way that these data are acquired on a state-by-state basis means that we might not be able to safely make comparisons across states. Moreover, according to one group of Harvard researchers, upwards of 40% of all gun owners report acquiring their most recent gun without a background check.

Thus, these numbers may tell a different story than one of ‘guns are being purchased more frequently.’ Although not employed in this post, there are some novel ways to develop stories similar to that one, like using NYT’s methodology to estimate gun sales from background check data. I encourage those interested to pursue their work, alongside the BuzzFeed News repository where this data came from, and analyze such questions yourself.

← Back to all posts